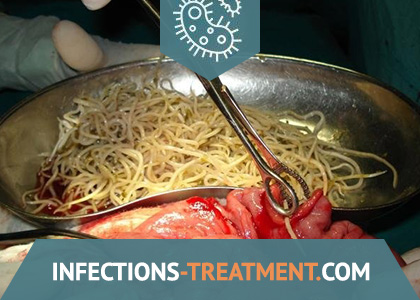 Ascaridosis (ascaridosis -lat., Ascariasis, lumbricosis – English, ascaridiose, lumbricose – French) is an invasion characterized by the presence of an early phase with manifestations of an allergic syndrome and a late one with a predominant gastrointestinal pathology.

In a living state, helminths are spindle-shaped, reddish, after the death of a yellowish-white color.

Males reach 15 – 25 cm in length and 2 – 4 mm in width. The tail end in a fixed state is hook-shaped. On the ventral side of the tail there are up to 70 pairs of preanal and 7 pairs of postanal papillae – organs of touch. Two equal spicules reach 1.5 – 2 mm in length.

Females are much larger – 20 – 40 cm in length and up to 6 mm in width. The rear end of their body is conically pointed. The vulva opens at the end of the anterior third of the body, where sexually mature females have a ring-shaped constriction. Near the posterior end, the anus opens on the ventral side.

The head end of the roundworm is provided with three lips that surround the mouth opening. On the lateral sides, longitudinal lateral lines are clearly visible, in which the tubules of the excretory system pass.

The digestive system is represented by the mouth, a long cylindrical esophagus, an intestinal tube ending in the anus.

The female reproductive system is represented by paired ovaries, oviducts and two uterus passing into the vagina, in the male – by the testes, vas deferens, the ejaculatory canal, which flows into the cloaca, and two spicules 1.5 – 2 mm long.

Ascaris fecundity is very high. At the same time, up to 27 million eggs at different stages of development are found in the body of females. An adult female lays about 240 thousand eggs per day; in the year of ascaris, it lays 64 million eggs. Both fertilized and unfertilized eggs are secreted into the external environment. Fertilized eggs are often oval, rarely spherical in size 50 – 70 x 40 – 50 microns. The eggs are covered with a thick multilayer membrane, the outer one is a tuberous protein, which, being in the genitals of the female, is colorless and transparent, when it enters the intestines, it is stained with feces pigment in dark yellow, brown color and becomes opaque. The inner shell – lipoid, multilayer, smooth, colorless, transparent protects the developing germ of chemicals. Inside the egg is a fine-grained spherical blastomere.

Sometimes eggs without a protein coat are found; they are smooth, colorless, transparent, and difficult to diagnose.

Unfertilized eggs can have the most diverse form – more often they are elongated, elongated, pear-shaped, trihedral. Their sizes vary widely – 50 – 100 x 40 – 45 microns. The protein shell of such eggs is rough, its teeth are uneven, long alternate with short ones. The entire contents of the egg is filled with large yolk cells. Rarely, there are unfertilized eggs without a protein outer shell. Such eggs are especially difficult to diagnose; they are often mistaken for plant cells.

Ascaris is a typical geohelminth. Its development takes place with the participation of one host and depends on the natural and climatic conditions of the area, determining the possibility of maturation of helminth eggs to an invasive stage in the external environment.

Mature helminths parasitize in the human small intestine. While parasitizing individuals of both sexes – females and males – females secrete fertilized eggs that can further develop, complete the biological cycle to the stage of an invasive larva. Eggs ripen in the soil at temperatures from + 13 to + 36 ° C and humidity not lower than 4 – 6 – 8%. In the process of development, the embryo in the egg goes through the stages of the blastomere, morula, gastrula, tadpole and, finally, the larva.

In the case of non-intensive invasion, when 1-2 females parasitize, they secrete unfertilized eggs, the detection of the second confirms the presence of invasion (this is important for the clinic), but such eggs do not develop further.

In the human intestines, the eggshell is destroyed, and the larvae are released. Then they make a difficult migration path by penetrating the mucous membrane, enter the blood capillaries of the intestinal wall, and then enter the liver through the portal vein system, from where they enter the right side of the heart through the lower genital vein and into the lungs through the pulmonary artery. Here, through torn capillaries, the larvae enter the lumen of the alveoli, with the help of the ciliated epithelium lining the bronchioles, bronchi, the trachea advance along the airways and enter the pharynx and oral cavity. When saliva is swallowed, they enter the stomach, then into the intestines, where they mature to adults.

Ascariasis is the most widespread geohelminthiasis in the world, confined to landscape geographic zones, natural endemic invasion. The degree of spread of ascariasis depends on the soil and climatic conditions of the area, which determine the possibility of the development of ascaris eggs, as well as the peculiarities of management (growing garden crops, berry crops), sanitary improvement, which determine the possibility of soil contamination with feces, as well as sanitary culture and household habits of people living here.

Globally, foci of ascariasis, that is, local ascariasis, do not form only in the tundra zone and in the zone of dry deserts and steppes, where artificial irrigation is not used to moisten the soil.

Ascariasis is the most common geohelminthiasis among the population of the Russian Federation, in rural areas the incidence is higher. Thus, ascariasis is most widespread in the central, western and southern regions of the European part of Russia, in irrigated areas and foothill regions of Central Asia, in the states of the Caucasus.

In Ukraine, the lowest incidence of ascariasis in the population was found in the southern dry steppe zone, and the highest in the northern wet forest zone.

The source of invasion in ascariasis is only an invaded person, children are of primary importance. Eggs excreted with feces are non-invasive, therefore, people infested with roundworms cannot infect others, even with close everyday communication.

The eggs of the helminth excreted with the feces of diseased patients should reach invasiveness, developing in the soil. For their development in the soil, favorable conditions are necessary: ​​a suitable temperature, humidity and access to atmospheric oxygen.

High temperature has a detrimental effect on ascaris eggs. At a temperature of + 50 ° C, eggs die quickly, at boiling temperatures – instantly. The amount of effective heat required to reach the invasive stage is within 300 ° C.

The third prerequisite for the development of ascaris eggs is the availability of sufficient oxygen. In the conditions of oxygen-free cesspools, eggs do not develop, but remain viable. The duration of survival of roundworm eggs in the soil is 7-12 years.

The formation and maintenance of foci of ascariasis in rural areas is facilitated by the nature of the population’s occupation (vegetable gardening, strawberry plantations) and the custom of fertilizing vegetable gardens with non-neutralized feces.

During the period of expansion of individual farming, the development of suburban vegetable gardens, berry plantations in the dacha villages of townspeople who are not provided with measures of sanitary protection of the soil, in the absence of latrines, it leads to fecal contamination and contributes to the spread of geohelminthiasis, primarily ascariasis.

During the games of children in the personal plot, playgrounds, in the sandboxes, when working in the garden, on the flower garden, the hands are contaminated with soil containing ascaris eggs, which also leads to infection through any food that is taken with dirty hands.

Infection with ascariasis can occur during the year, but mainly in the temperate climate zone in the autumn period of the year, when berries and vegetables ripen. Given the presence of greenhouses, as well as the preservation of vegetables in cellars, infection is possible in winter conditions.

Due to the peculiarities of the development of ascaris in the human body, the highest invasion of sexually mature helminths is detected in winter.

The duration of the season of mass infection of people is different in different climatic zones. In the middle lane, it leaves 6-7 months (from April to October).

Infection with ascariasis occurs by the oral route. In the process of development of roundworm in the body, there are two phases: migration and intestinal.

The pathological basis of the migratory, or early, phase is the sensitization of the body by the metabolic products of larvae migrating in the blood and tissues and the decay of the dead. Metabolic products of ascaris larvae are strong parasitic allergens. They cause allergic hypersensitivity reactions, both general and local; eosinophilic infiltrates in the lungs, granulomatous hepatitis, skin rashes, hypereosinophilia in the blood, etc. It is also important that the larvae traumatize tissues during migration, the formation of hemorrhages, and sometimes extensive hemorrhages.

In the intestinal phase of ascariasis, the allergic factor is less pronounced, although the phenomena of allergic toxicosis also occur.

Adult roundworms cause mechanical injury due to the elasticity of the bodies and mobility. To a certain extent, these mechanisms play a role in reflex dysfunction of the stomach, intestines, the development of spastic intestinal obstruction, trauma to the wall of the small intestine, up to its perforation.

Severe surgical consequences entail the penetration of ascaris into the liver, respiratory tract. The presence of ascaris in the intestine greatly complicates the course and outcome of surgical interventions for various pathologies.

An important role in the pathogenesis of ascariasis is played by a negative effect on vitamin metabolism. This is evidenced by the deficiency of pyridoxine, retinol, ascorbic acid, violation of intestinal eubiosis. The immunosuppressive effect of ascaris has been proven, the production of antibodies to diphtheria toxoid is weakened in children.