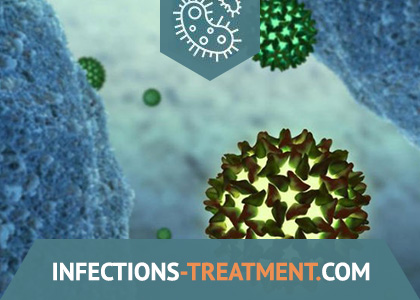 Melioidosis (false glanders, Whitmore’s disease) is an acute infectious disease that occurs in the form of severe sepsis with the formation of multiple abscesses in various organs or in the form of relatively benign pulmonary forms.

The causative agent of meloidosis is Pseudomonas pseiidomallei (Bacillus Whitmore). It is a gram-negative, bipolar stained rod with a length of 2-6 microns and a width of 0.5-1 microns. Aerob has flagella, motile, grows well on nutrient media. The pathogen persists for a long time in the environment. In a humid environment, it can survive up to 30 days, in rotting materials – 24 days, in water – up to a month or more. Dies when heated and under the influence of disinfectants. There are 2 antigenic types of pathogen: type I (Asian), widely distributed throughout, including Australia, and type II (Australian), distributed mainly in Australia. Pathogenicity of these types is not significantly different. The pathogen is sensitive to chloramphenicol, tetracycline, kanamycin, some sulfanilamide drugs.

Epidemiology. Melioidosis is endemic in countries of Southeast Asia and Northern Australia, where it is observed in humans and animals. Melioidosis is endemic in Vietnam, Burma, Malaysia, Kampuchea, Thailand. It is also observed in neighboring countries – India, Indonesia, Borneo, the Philippines, Sri Lanka. Isolated cases of disease have been reported from Madagascar, Kenya, Niger, Turkey, Iran, as well as from Panama and Ecuador. In Europe and the United States, cases of melioidosis are imported. Thus, in the United States since 1973, when all American troops were withdrawn from Vietnam, there were 343 cases of melioidosis among soldiers, of whom 36 died.

In regions which are endemic in melioidosis, the main reservoir of the pathogen in nature is soil and water contaminated with secretions of infected animals. In these areas, the pathogen can be isolated from the soil, standing water bodies, ponds, rice paddies. Animals release the pathogen with urine and feces, they themselves become infected when they consume feed and water. Melioid infection can be observed in many species of animals: rats, mouse-like rodents, rabbits, cows, dogs, cats, kangaroos, etc. Arthropods are not involved in the transmission of infection. In endemic areas, melioidosis is widely distributed, as evidenced by the fact that 7-10% of the adult population of these areas show antibodies to the causative agent of melioidosis. Infection of a person can occur through the use of infected food or water, as well as by airborne (air-dust). Often, infection occurs when small skin lesions become contaminated with soil. Infection of a person from a person is extremely rare. A case of sexual transmission of infection to patients with chronic prostatitis (in the secret of the prostate gland identified the pathogen melioidosis) spouse, which has never been in endemic areas. A disease of a nurse who was not in endemic areas, but worked in wards for patients with melioidosis was detected. This indicates the possibility of nosocomial infection of persons with weakened immunity.

The gates of infection are minor damage to the skin or mucous membrane of the digestive system or respiratory tract. The lymphogenous pathogen reaches the regional lymph nodes, where it sometimes multiplies with the formation of a purulent focus. In septic forms of melioidosis, the pathogen penetrates the blood and hematogenously spreads to various organs and systems, forming there many secondary foci with caseous decay and abscesses. Most foci develop in the lungs, single abscesses – in other organs. In the subacute course, foci in the lungs are characterized by large sizes, and secondary foci are found in all organs and tissues – skin, subcutaneous tissue, liver, spleen, kidneys, bones, in the meninges, brain, and lymph nodes. Secondary foci consist of a central caseous necrosis zone surrounded by granulation tissue. Calcifications do not develop. The septic course of melioidosis is observed in sharply weakened individuals. With a good reactivity of the macroorganism, relatively benign pulmonary abscesses often occur, in which inflammatory changes and abscesses develop only in the lungs. Probably, melioidosis can occur in the form of a latent infection. For example, cases of melioidosis have been observed in the United States in individuals who returned from endemic areas of Southeast Asia several years ago. After the transferred melioidosis, antibodies appear in the blood. Cases of recurrent melioidosis are not described.

The incubation period of melidosis lasts only 2-3 days (according to laboratory infections from the time of skin damage to the development of the disease). The main clinical forms:

Septic form. In some patients, this form begins relatively gradually. Initially, an inflammatory infiltrate appears at the site of the pathogen (skin damage), regional lymphadenitis develops, body temperature rises and the disease acquires a septic course quite soon. In most patients, the septic form begins suddenly with chills, high fever, a sharp headache, shortness of breath. In some cases, the disease proceeds violently, and the patient dies from an infectious toxic shock in 2-4 days before the development of secondary septic foci (fulminant form). In other cases, the primary focus is inflammatory changes in the lungs, from which the hematogenous infection then spreads to various organs and systems. General weakness appears, the temperature with chills rises to 39 ° C and higher, the patient is concerned about coughing, chest pains of a pleural nature, dullness of percussion sound is detected, moist rales are heard over the affected parts of the lungs. The process is often localized in the upper lobes. Then the severity of the course increases. Multiple pustules appear on the skin and abscesses in the muscles and internal organs. The disease lasts 8-12 days.

A very rapid development of septic infection is observed in weakened individuals (drug addicts, diabetics, patients with alcoholism, etc.). In these cases, fever and signs of general intoxication quickly increase. At the same time, signs of lung damage and multiple lesions of other organs appear. Pharyngitis, pustular rash all over the body, loose watery stools, severe shortness of breath, cyanosis are noted. Some patients develop purulent arthritis, meningitis, impaired consciousness. When radiography of the lungs, nodular shading with a diameter of about 10 mm is noted, prone to fusion into larger infiltrates. These forms of the disease are usually not amenable to therapy.

With subacute and chronic forms of meloidosis, a longer course is noted with the formation of sluggish current abscesses in various organs and tissues. These forms periodically give remissions, however, without etiotropic therapy, patients also die within a month (subacute forms) or after a few months (chronic forms).

Pulmonary form of melidosis can begin suddenly, but more often this disease develops gradually, sometimes it is detected even by accident during X-ray studies. The main signs of this form of melioidosis are fever, cough with purulent, sometimes bloody sputum, growing weakness, emaciation, chest pain. Fever is usually irregular or intermittent in nature with chills and sweat. Patients develop a cough with a large amount of purulent sputum, stitching pains in the chest, decreased appetite, weakness is noted; weight loss is an average of 10-15 kg. Hemogram: neutrophilic leukocytosis, increased ESR. With an X-ray examination, the changes are very similar to tuberculosis. The upper lobes are more often affected, in most patients with the formation of thin-walled cavities with a diameter of 1-4 cm. Some patients may have several cavities (2-3 or more). Sometimes lung damage occurs in the form of infiltrates without caseous decay and cavity formation.

Recurrent melioidosis. The causative agent of melioidosis can persist for a long time in the body as a latent infection. Activation of latent infection can manifest itself in the form of an acute septic or pulmonary disease or in the form of a chronic localized purulent disease. Relapse develops a long time after the initial infection. A case of relapse is described 26 years after infection. Relapse can be triggered by surgery, severe influenza pneumonia, radiation therapy, etc. It is necessary to take into account the activation of latent melioid infection in AIDS patients.

The diagnosis is complex, epizootic data, clinical signs, pathological changes and the results of bacteriological studies are taken into account. To isolate a pure culture, seeding is done from the material on MPA, MPB, MPZH. A bioassay is put by introducing the material into the guinea pigs under the skin (males can be in the abdominal cavity), the animals die on the 10th-20th day (males develop orchitis and peritonitis, with subcutaneous administration – an ulcer at the injection site).

The clinical diagnosis of septic forms of melioidosis does not present great difficulties. Stay in an endemic area, a severe course of the disease, progressive respiratory failure, multiple pustular elements on the skin, multiple abscesses in the subcutaneous tissue, muscles and internal organs is important.

Pneumonic forms of melioidosis can be diagnosed on the basis of epidemiological prerequisites, the subacute course of pneumonia with lesions of the upper lobes, with the early formation of thin-walled cavities, cough with purulent or bloody sputum, weight loss, irregular fever with occasional chills.

From laboratory methods, the allocation of pathogens (from blood, pus abscesses, sputum) is used. Serological reactions are used. CSC with a specific antigen is considered diagnostic already at a titer of 1: 8 and above. Negative CSC does not exclude the possibility of melioidosis. The hemagglutination reaction is more sensitive, which early becomes positive in titers 1: 16-1: 64.

Forecast. Before antibiotics were introduced into practice, mortality in septic forms was close to 100%, with modern methods of treatment in septic forms, about 50% or more die. With other forms of melioidosis, the prognosis is more favorable. The likelihood of distant relapses is about 20%.

Specific prevention is not developed. Patients with melioidosis are subject to isolation and hospitalization. In endemic areas, measures are taken to destroy rodents and protect products from them. It is forbidden to use raw water and swimming in stagnant bodies of water.

If melioidosis is suspected, sick animals are isolated and examined bacteriologically. In a dysfunctional household, disinfection, deratization and pest control are carried out. Slaughter for meat of sick and disease-suspicious animals is prohibited.