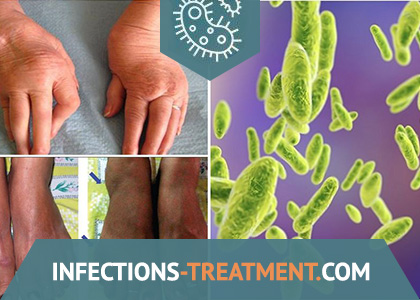 Brucellosis is a zoonotic infectious-allergic disease, prone to chronicity, occurring with a primary lesion of the musculoskeletal system, cardiovascular, nervous and reproductive systems.

Brief historical information
The disease has been known since the days of Hippocrates, but its scientific study began only in the 60s of the XIX century (J. Marston, 1859). At that time, it was called the “Mediterranean or Maltese fever.” The causative agent of brucellosis was first discovered by D. Bruce (1886), who gave the bacteria the name Micrococcus melitensis. Later, Bang and B. Stribold identified similar microorganisms (B. abortus) for infectious abortions in cows (1897), and J. Traum in pigs (B. suis, 1914). In 1920, the bacteria were combined into one genus, named after D. Bruce Brucella, and the disease they caused was called brucellosis. Later, new types of Brucella were identified – B. neotomae (1957), B. ovis and B. canis (1970).

Serological tests for brucellosis were started by A. Wright and D. Semplom (1897). Agglutination Reaction (RA) Wright later gained great importance in the laboratory diagnosis of the disease.

Identifying Brucella species and biovars in specific areas and in the foci of infection has important epidemiological and epizootological importance in terms of classifying foci, assessing the degree of intensity of the epidemic and epizootological processes, establishing the facts of brucella migration from one species to another, identifying the pathways of the pathogen, and choosing tactics treatments, etc.

Brucella are highly invasive and can penetrate intact mucous membranes; they are referred to as intracellular parasites, but they can also be outside the cell. Brucella are quite stable in the environment. More than 2 months remain in water, 3 months in raw meat, up to 30 days in salted meat, 2 months in cheese, and 4 months in wool. Brucella die when heated to 60 ° C in 30 minutes, while boiling – instantly. Sensitive to the action of many disinfectants – a 2% solution of carbolic acid, a 3% solution of creolin and lysol, a 0.2-1% solution of bleach and chloramine kill them within a few minutes.

Epidemiology
The main source and reservoir of infection are sheep, goats, cattle and pigs. Reported cases of human infection with reindeer brucellosis. In rare cases, the source of infection can be horses, camels, yaks and some other animals that secrete the pathogen with milk, urine, feces, amniotic fluid. Most often, a person becomes infected with brucellosis from small livestock, the causative agent of which (V. melitensis) causes the majority of severe forms of the disease. It is also quite common for a person to become infected with B. abortus from cattle, however, a clinically expressed infection is recorded in isolated cases. The course of the disease is easy; a sick person is not dangerous to others.

The mechanism of transmission of the pathogen is diverse, most often fecal-oral; contact-aided use is also possible (if the pathogen enters the damaged skin and mucous membranes) and the aerogenic transmission mechanisms. The epidemiological significance of food products and raw materials of animal origin determine the massiveness of seeding, the type of pathogen, the duration of its preservation. The most dangerous are raw dairy products (milk, cheese, cheese, koumiss, etc.), meat and raw materials (wool, astrakhan and leather) from goats and sheep with brucellosis. Meat is a much lower epidemiological risk, as it is usually consumed after heat treatment. However, in some cases, with insufficient heat treatment (national cooking characteristics – sliced, blood shashlyk, raw minced meat, etc.), meat and meat products can be the cause of brucellosis infection.

Sick animals pollute the soil, litter, fodder, and water with Brucella, which in turn become factors that cause human infection. There have been cases of human infection during manure removal. The aspiration route of infection is possible when inhaling air-dust mixture containing infected fragments of wool, manure, earth. This way of infection is possible when shearing, sorting wool, combing down (development, knitting, etc.), as well as when cleaning premises and territories where animals are kept or raw materials are processed from them. In this case, Brucella can also penetrate the mucous membrane of the conjunctiva of the eye. There are cases of laboratory aerogenic infection when working with bacteria cultures. There are cases of human infection through water, but the epidemiological significance of this route of transmission is small. Possible intrauterine infection of the fetus and infection of children when feeding with breast milk.

The natural susceptibility of people is high. Post-infectious immunity usually lasts 6-9 months. Repeated diseases are observed in 2-7% of cases.

Major epidemiological signs. Brucellosis – a ubiquitous infection; foci of disease are found on all continents. Moreover, it is characterized by a pronounced professional nature of morbidity: it is most common in rural areas among livestock workers. The incidence of people is closely associated with epizootics among cattle, sheep and goats. A significant place in some cases is occupied by the possibility of the migration of brucella from a biologically adapted host to other animals. Migrations are most often facilitated by joint keeping or joint grazing of various animal species. The greatest danger is the migration of B. melitensis to cattle. Mainly people working with animals get sick: shepherds, shepherds, milkmaids, veterinary and zootechnical workers, employees of bacteriological laboratories, meat processing plants, slaughterhouses, and wool-processing factories. Infection can occur during the processing of raw meat, leather, animal hair, patients with brucellosis. In such cases, the penetration of Brucella into the human body occurs through the skin, mucous membranes of the eye, nose, mouth. In laboratory examinations of livestock breeders, 1.5-2% of individuals with antibodies to brucellosis pathogens are detected. The prevalence of brucellosis is not identical across regions, it is recorded mainly in livestock areas. Epizootics and a high incidence of brucellosis persist in the CIS countries, mainly in Kazakhstan and Central Asian countries, from which infectious raw materials are possible to enter Ukraine. The maximum number of goat-sheep type brucellosis occurs in the spring-summer period. When infected with brucellosis from cattle, seasonality is less pronounced, which is explained by a long lactation period and infection mainly through milk and dairy products.

Brucella penetrate the human body through mucous membranes or damaged skin, leaving no changes in the area of ​​the entrance gate. By lymphogenous pathogens are brought into the regional lymph nodes and accumulate in them. This phase of the infection is called lymphogenous and corresponds to the incubation period of the disease. Its duration may be different and depends on the ratio of the activity of pathogens (infectious dose) and the body’s defenses. With long-term preservation of brucella in the lymph nodes, an immunological rearrangement of the body occurs, antibodies detected in serological reactions accumulate, a skin allergy test with brucellin becomes positive, but clinical manifestations do not develop (primary latency phase).

After it comes hematogenous phase (phase of hematogenous drift). Bacteremia and endotoxemia develop, and clinical symptoms of acute brucellosis appear. These manifestations are associated with functional disorders of the autonomic nervous system under the influence of endotoxin and toxic-allergic reactions.

With blood flow, pathogens are spread through organs rich in reticuloendothelium, and fixed in them (the phase of poly-focal localizations). The macrophage system is activated, diffuse changes develop in organs and tissues, and focal accumulations of macrophages are formed with intracellularly parasitic brucella in them. These processes, aimed at reducing the intensity of bacteremia, localization and fixation of pathogens, lead to the formation of secondary polyorgan foci of infection in the form of specific granulomas. In connection with the sensitization of the body, allergic manifestations develop – delayed-type hypersensitivity reactions, and sometimes immediate-type hypersensitivity.

The possibility of long-term persistence of pathogens inside macrophages is explained by the incompleteness of phagocytosis and the slow development of reactions of the immune response. Metastatic foci of brucella reproduce easily in organs with the development of localized infiltrates; The clinical picture shows signs of focal lesions on the part of the musculoskeletal, nervous, and other systems. Subsequent episodes of release of pathogens into the bloodstream support bacteremia and endotoxemia, give the disease a wave-like character. These mechanisms develop into the phase of subacute brucellosis, but in some cases focal lesions form early, even at the stage of acute brucellosis.

The disease is prone to long-term course and transition to a chronic condition. Long-term preservation of pathogens in metastatic foci with episodes of re-dissemination and the development of reactive-allergic changes underlies chronic brucellosis (the phase of exo-focal seeding and reactive-allergic changes). In the chronic process, the pathogenetic significance of bacteremia and endotoxemia, the activity of inflammatory and allergic organ focal reactions, weakens. The formation of new inflammatory foci is associated primarily with autoimmune mechanisms.

With chronic brucellosis in various organs and systems, functional and sometimes irreversible organic disorders are formed with the development of persistent cicatricial changes. They persist even after complete sanation of the organism and in these cases underlie the pathogenesis of the phase of the so-called residual metamorphosis (the phases of the outcome and residual effects). Functional disorders are distinguished by a paucity of objective symptoms with an abundance of subjective complaints.

Epidemiological surveillance is based on the results of an assessment of the epizootic and epidemic situation. In this regard, the timely exchange of information and joint activities of the veterinary and sanitary-epidemiological services for the identification of diseases among animals and people and the assessment of risk factors for their occurrence play an important role in the organization and conduct of anti-brutal measures.

Prevention and control of brucellosis are based on a set of veterinary-sanitary and medical-sanitary measures aimed at reducing and eliminating the incidence of brucellosis in farm animals. The livestock of animals in disadvantaged areas should be systematically examined for brucellosis using serological and allergological tests for the timely detection and elimination of sick animals. As an auxiliary measure in regions endemic for brucellosis, active immunization of brucellosis in animals is carried out by administering a live vaccine. Permanent and temporary livestock workers, as well as meat processing plants, are also subject to vaccination. Of great importance are the neutralization of raw materials and animal products, boiling and pasteurization of milk and dairy products, and other activities. Special attention should be paid to the premises where livestock are kept. After the removal of manure or removal of aborted fruits and the latter, the room should be disinfected with a 20% bleach solution, a 2% formaldehyde solution or a 5% solution of a soap-creosol mixture. Adolescents, pregnant women and people suffering from chronic diseases are not allowed to take care of animals. All persons allowed to work with animals must be provided with special clothing, the ability to use disinfectants is also necessary. Great importance is the strict observance of the rules of personal hygiene. At the same time, systematic preventive examination of personnel engaged in working with animals is carried out (at least once a year). An important role is played by the explanatory work on the danger of eating raw milk and uncooked cheeses and sheep cheese, the use of animal fur from brucellosis-unfriendly farms.

Activities in the epidemic focus
Hospitalization of patients is carried out only according to clinical indications, as a sick person is not an epidemiological hazard. Clinical supervision of the patient is carried out within 2 years after clinical recovery. Persons in contact with sick animals are subject to clinical and laboratory examination, repeated after 3 months. As an emergency prophylaxis, rifampicin (0.3 g 2 times a day), doxycycline (0.2 g 1 time a day), tetracycline (0.5 g 3 times a day) are prescribed orally for 10 days.