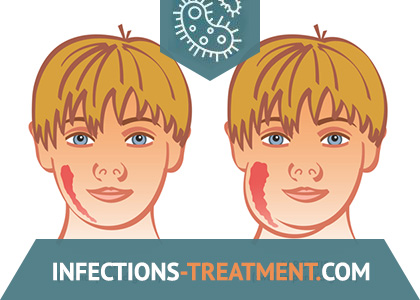 The incubation period lasts from 11 to 23 days (usually 15-19 days). In some patients, 1-2 days before the development of a typical picture of the disease, prodromal phenomena are observed, manifested by congestion, headache, pain in the muscles and joints, dry mouth, and unpleasant sensations in the parotid glands.

More often, the disease begins acutely with chills and fever from subfebrile to high numbers; fever lasts no more than 1 week. However, cases of the disease occurring with normal body temperature are not uncommon. Fever is accompanied by headache, general weakness, malaise, and insomnia. The main manifestation of mumps is inflammation of the parotid, and possibly submandibular and sublingual salivary glands. In the projection of these glands, a swelling appears, painful on palpation (more in the center), which has a pasty consistency. With a pronounced increase in the parotid salivary gland, the patient’s face becomes pear-shaped, the earlobe rises from the affected side. The skin in the area of ​​swelling is tense, glossy, hardly creases, its color is usually not changed. More often the process is bilateral, exciting after 1-2 days the parotid gland and on the opposite side, but unilateral lesions are possible. The patient is disturbed by a feeling of tension and pain in the parotid region, especially at night; when the tumor is squeezed by the Eustachian tube, noise and pain in the ears may appear. When pressing behind the earlobe, severe pain appears (Filatov’s symptom). This symptom is the most important and early sign of mumps. The mucous membrane around the opening of the stenon duct is hyperemic and edematous (Mursu symptom); often noted hyperemia of the pharynx. In some cases, the patient cannot chew food due to pain, and in even more severe cases, a functional trismus of chewing muscles develops. Possible decreased salivation and dry mouth, hearing loss. The pain lasts 3-4 days, sometimes radiating to the ear or neck, and gradually subside by the end of the week. Around this time or a few days later, puffiness in the projection of the salivary glands disappears. With mumps, regional lymphadenopathy, as a rule, is not noted.

In adults, the prodromal period is noted more often, it is characterized by more pronounced clinical manifestations. In addition to general toxic, catarrhal and dyspeptic phenomena are possible during this period. The acute phase of the disease, as a rule, is more severe. Significantly more often than in children, lesions (possibly isolated) of the submandibular and sublingual salivary glands are observed. With submaxillitis, the salivary gland has a testy consistency and is slightly painful, elongated along the lower jaw, which is recognized when the head is tilted back and to the side. Edema of the subcutaneous tissue around the gland sometimes extends to the neck. Sublingvit is manifested by swelling in the chin area of ​​the same nature, pain under the tongue, especially when it protrudes, local hyperemia and swelling of the mucous membrane. A swelling in the projection of the salivary glands in adults lasts longer (2 weeks or more).

Classification of the clinical forms of mumps.

Two criteria were used in the classification of manifest forms of mumps: the presence or absence of complications and the severity of the disease. The possibility of an inapparent (asymptomatic) course of infection is indicated below and residual phenomena that persist (after life) after elimination of the mumps virus from the patient’s body are first identified in the classification. The need for this section is determined by the severity of the consequences of mumps (infertility, deafness, etc.), which practitioners often forget.

Uncomplicated forms include those cases of the disease when only the salivary glands are affected (one or more). In complicated forms, damage to the salivary glands is also an essential component of the clinical picture, but in addition, damage to other organs, more often glands (genital, pancreas, mammary, etc.), as well as the nervous system (meningitis, encephalitis, Guillain-Barré syndrome) develops. , myocardium, joints, kidneys.

Criteria for the severity of mumps are associated with the severity of fever, signs of intoxication, as well as the presence or absence of complications. Uncomplicated mumps usually proceeds easily, less often is moderate, and in severe forms, complications (often multiple) are always noted.

Mild forms of mumps include diseases that occur with subfebrile body temperature, with the absence or mild signs of intoxication, without complications.

Severe forms of mumps are characterized by high body temperature (40 ° C and above), its prolonged increase (up to 2 weeks or more), pronounced signs of general intoxication: asthenia, severe weakness, tachycardia, decreased blood pressure, sleep disturbance, anorexia, etc. Mumps is almost always bilateral, complications are usually multiple. Toxicosis and fever occur in the form of waves, each new wave is associated with the appearance of another complication. Sometimes a severe course is not observed from the first days of the disease.

Complications of mumps. With mumps, complications more often occur in lesions of the glandular organs and the central nervous system. In diseases of children, one of the most common complications is serous meningitis. The frequency of this complication exceeds 10%. Mumps meningitis accounts for about 80% of all serous meningitis in children. In males, meningitis develops 3 times more often than in women. As a rule, symptoms of damage to the nervous system appear after inflammation of the salivary glands, but simultaneous damage to the salivary glands and the nervous system is also possible (in 25-30%). In 10% of patients, meningitis develops before inflammation of the salivary glands, and in some patients with mumps, meningeal symptoms are not accompanied by pronounced changes in the salivary glands (probably, by the time of development of meningitis, mild changes in the salivary glands have already passed). Meningitis begins acutely, often violently (more often on the 4th-7th day of the illness): chills appear, the body temperature rises again (up to 39 ° С and higher), severe headache, vomiting, and pronounced meningeal syndrome (stiff neck , symptoms of Kernig, Brudzinsky). The cerebrospinal fluid is clear, flows out under pressure, the protein content rises to 2.5 g / l, cytosis to 1000 in 1 μl, the content of chlorides and sugar is usually not changed, sometimes a fibrin film may precipitate. Symptoms of meningitis and fever disappear after 10-12 days, rehabilitation of the cerebrospinal fluid occurs slowly (up to 1.5-2 months).

Orchitis is more common in adults. Their frequency depends on the severity of the disease (with moderate and severe forms of orchitis occur in about half of patients). Signs of orchitis are noted on the 5-7th day from the onset of the disease and are characterized by a new wave of fever (up to 39-40 ° C), the appearance of severe pain in the scrotum and testicle, sometimes radiating to the lower abdomen. The testicle grows, reaching the size of a goose egg. The fever lasts 3-7 days, an increase in the testicle – 5-8 days. Then the pains go away, and the testicle gradually decreases in size. In the future (after 1-2 months), signs of testicular atrophy may appear, which are noted in 50% of patients who have had orchitis (if corticosteroids were not prescribed at the beginning of the development of the complication). In mumps orchitis, a pulmonary infarction was observed as a rare complication, as a result of thrombosis of the veins of the prostate and pelvic organs. The symptoms of vein thrombosis are explained here. An even rarer, but extremely unpleasant complication of mumps orchitis is priapism (prolonged painful erection of the penis with blood filling of the cavernous bodies, not associated with sexual arousal).

Acute pancreatitis develops on the 4th-7th day of illness. Sharp pains in the epigastric region, nausea, repeated vomiting, fever appear, when examined, some patients have abdominal muscle tension and symptoms of peritoneal irritation. A characteristic increase in urine amylase activity, which lasts up to a month, while other symptoms of pancreatitis are observed for 7-10 days.

Damage to the hearing organ sometimes leads to complete deafness. The first sign is the appearance of noise and ringing in the ears. Dizziness, vomiting, impaired coordination of movements indicate the labyrinthitis. Deafness is usually one-sided (on the side of the lesion of the salivary gland). In the period of convalescence, hearing is not restored.

Arthritis develops in approximately 0.5% of patients, more often in adults, and more often in men than in women. They are observed for the first time 1-2 weeks after the defeat of the salivary glands, although their appearance is possible even before the change in the glands. Large joints are affected more often (wrist, elbow, shoulder, knee and ankle). The joints swell, become painful, and a serous effusion may appear in them. The duration of arthritis is often 1-2 weeks, in some patients the symptoms of arthritis persist for up to 1-3 months.

It has now been established that mumps virus in pregnant women can cause fetal damage. In particular, a peculiar change in the heart is noted in children – the so-called primary myocardial fibroelastosis.