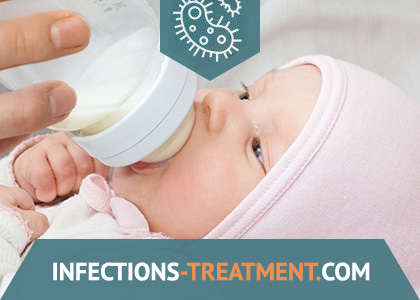 What is Lactase Deficiency in Children?

Lactase deficiency – a condition that is characterized by a decrease in the activity of the lactase enzyme in the small intestine, proceeds latently or manifestly (explicitly).

Lactase deficiency in children is of two types: congenital and secondary (acquired).

Secondary lactase deficiency is associated with damage to the enterocyte during infectious, atrophic, immune changes, and can also occur under the action of trophic factors.

Pathogenesis during Lactase Deficiency in Children

Lactose is a disaccharide that contains galactose and glucose. In the small intestine, lactose is broken down into glucose and galactose, in which the enzyme lactazoflorizin hydrolase plays an important role.

When a child begins to eat as an adult, the activity of lactase decreases, the activity of sucrose and maltase increases. The rate of decrease in enzyme activity depends on genetic factors, mainly on ethnicity.

If the lactase activity is too low, and the food received in the small intestine is not digested, undigested lactose enters the colon. Microorganisms feed on it there.

Symptoms of Lactase Deficiency in Children

Depending on the degree of reduction of the enzyme and the individual characteristics of the body, various clinical symptoms appear:

Lactase deficiency in children can affect the formation of electrolyte-electrolyte disturbances, polyhypovitaminosis. The result is a delay in the development of the child.

Diagnosis of Lactase Deficiency in Children

Lactase deficiency in children is diagnosed by typical symptoms. Be sure to confirm using these survey methods:

This method shows the activity of microflora in relation to lactose fermentation. This method is used not only for older children, but also for adults.

Glycemia is recorded before and after loading with lactose. The result shows the effectiveness of the breakdown and absorption of lactose in the small intestine. If the child is not sick, an hour after consuming lactose, the glucose level in the blood should increase by at least 20% of the initial one. The concentration of glucose in the blood, as a rule, is determined on an empty stomach, 15, 30 and 60 minutes after loading with lactose.

Typically, this method is used in combination with the determination of carbohydrate content in the feces of a child.

The result shows how much the body is able to absorb carbohydrates. But the types of disaccharidase deficiency cannot be recognized by this method. The advantages of determining the total carbohydrate content in feces are low cost and availability.

In order not to get false negative results, during the study, the child should consume an adequate amount of lactose. In infants, the carbohydrate content is normally less than 0.25%, and in children from 1 year old the content is zero.

Determination of lactase activity in biopsies of the small intestine mucosa

This method is considered the “gold standard” for the diagnosis of lactase deficiency in children. But its disadvantages are the high cost and complexity, which does not allow the use of this method in all cases of suspicion of lactase deficiency. The result may be affected by the location of the biopsy sample. In secondary latcase insufficiency in children, several samples are taken from different parts of the mucous membrane, in which there may be different enzyme activity.

Morphological examination of the mucous membrane of the small intestine is not effective for the diagnosis of the disease in children.

Treatment of Lactase Deficiency in Children

In primary lactase deficiency, first of all, the amount of lactose in the diet is reduced or even completely eliminated. At the same time, intestinal dysbiosis must be corrected and other symptoms eliminated.

With secondary lactase deficiency in children, you first need to cure the underlying disease, which is at the root of the problem. Temporarily reduce the amount of lactose consumed with food so that the mucous membrane of the small intestine is restored.

The product, which contains the maximum lactose, is whole milk. It must be excluded from the diet of a sick child. You can include butter, dairy products, and hard cheeses in your diet. You need to pay attention to the fact that less calcium will come from food than before the exclusion of milk.

In infancy, adjusting the diet is more difficult. If the baby is fed from the mother’s breast, it is not advisable to reduce the amount of milk. In such cases, doctors often recommend the use of lactase preparations mixed with expressed breast milk.

If it is impossible to use lactose preparations, low-lactose mixtures are prescribed. If the baby is breastfed, a mixture is selected with the maximum amount of lactose, which does not cause symptoms and does not increase the content of carbohydrates in the feces.

In the normal condition of the child, without toxicosis and exicosis and when the carbohydrate content in the feces is not higher than 0.3-0.6%, it is advised to start with a diet that contains up to 2/3 of carbohydrates in the form of lactose. You can combine the adapted mixture with low-lactose or take the sour-milk mixture Lactofidus. The latter contains 5.3 g of lactose per 100 ml, lactazan activity is fixed.

After changing the diets, after 1 week they control the carbohydrate content in the feces to determine whether it is necessary to further reduce the amount of lactose consumed.

If the baby is premature and the amount of carbohydrates in the stool is much higher than normal, such mixtures as Enfalak, Alprem, Frisopre are used for feeding. They form the basis of the diet.

With a pronounced deficiency of lactase, or if a decrease in the consumed lactose by 2 times did not produce a result, low-lactose mixtures are used, for example, Nutrilon low-lactose.

In advanced cases, as well as for premature babies with an unclear cause of lactase deficiency and impaired food tolerance, mixtures are prescribed based on partial or complete protein hydrolyzate until the cause of the disease is eliminated.

After this, the diet is expanded, giving the child more lactose (by 1/3, then by ½). Carbohydrate excretion is monitored every week.

For premature infants, the use of soy mixtures is not recommended. In any form of lactase deficiency, the carbohydrate content of the stool should be regularly monitored. If the disturbances resume, they reduce the amount of lactose consumed by the child.